Beats and Bedrocks (multiple artists)
[SB/orMusic records]
In 1995 in The Netherlands a lot of clubs almost had to close because of new laws concerning sound levels. Even shopping trolleys or whatever things in normal life went up to the benchmark. A protest CD was the answer of the music scene in the city of Groningen. PEAR, in the meantime decimetad to a solo project, contributed with one track. orMusic did most of the producing and engineering stuff (for free). Studio Boterdiep offered free studio time and took care of the CD duplication.
Unfortunately the price of the CD (25 guilders) was way too high. But to be positive: publicity was achieved and a lot of interesting bands/projects contributed: 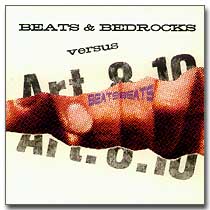